Have you met Terry?

Terry is part of the ownership duo over at our Steeles & Kennedy, Brampton Sunset Grill and he has deep roots within the community. Chances are you’ve met someone he’s related to.

“I’m related to a village, that’s the truth,” laughed Terry. He comes from a big Greek family and extends that warmth and hospitality to every person that enters his restaurant.

“Anyone who walks out of the restaurant is leaving full. That’s the rule,” he said. “This is my home; this is my family. People who walk in the door, they are our guests, not customers, let’s treat them like guests. That’s important to me,” said Terry. And he lives and breathes those words. Whether it be rushing out to buy a CD player so he can play one of his guests’ hand-picked playlists or cozying up with a couple of regulars in between working the grill, Terry ensures every guest feels taken care of when they’re at Sunset Grill.

From the time Terry was old enough to reach the grill, he’s been working in the restaurant industry. From taking the subway to work at 13 years old to his formative years spent working late-night serving shifts on The Danforth or “Greektown”, he’s a veteran of the scene.

It was during that time he discovered Sunset Grill – he used to frequent the original location in the Beaches area of Toronto after his late-night serving shifts. “We would go eat breakfast after a long shift, go home for two hours to sleep, and then go back to work,” he laughed.

It was a constant grind.

Eventually Terry found himself in college, then university studying financial planning and economics. He eventually got out of the restaurant industry in 2004 and started a new path in mortgages, something he still does to this day.

Then Sunset Grill popped up again. He snatched up the Steeles & Kennedy location back in December 2020, amid the pandemic. He was familiar with the location and the original ownership, so he was confident he could make it work, despite vowing to never get back into the industry. Terry and his daughter, Maria.

“It’s a great franchise, good backbone, great product and great hours,” said Terry. “I know I’m good at it. I love people, I love food. I decided to get back into it because of the hours.”

“I can have a balanced life; I can be with my family.”

Terry has a wife and two kids at home. His oldest, Maria, 13, is going to high school in the fall and his son, George, is 3 years old and loving life. He’s recently gotten his son into soccer and his daughter loves track.

After stepping out of the voting booths a couple weeks back, Terry and his daughter discovered there was a track at the school in which he voted. “My daughter turned to me and said, ‘Are you up for 100 metres?’ and I said, ‘let’s do it!’”

“I ran for 10 metres and pulled a muscle in my back leg,” Terry laughed. “I continued to beeline it down the track and still beat her… just saying,” he said with the biggest grin on his face. Terry and his son, George.

It’s no surprise he’s close with his family. “At the end of the day it’s all about family. I feel like mom keeps everyone tight together, and it’s dad that keeps the cheer in the family too.”

For Father’s Day this year, Terry is looking forward to simply spending quality time with his family after the restaurant. “For me it’s more of a family day,” he said. “Let’s bring everyone together. As long as we’re together, that’s all that matters.”

He’s hoping to take the family on a trip to Greece this year, to show his children where they come from and the importance of family traditions.

He learned a lot of important values from his parents and hopes to extend that to his own children. Terry is a big believer in giving back to the community and is involved in several charity initiatives as president of the Greek Orthodox Community of Mississauga.

From packing knapsacks for the homeless to running soup kitchens and supporting more than 7,000 families across the region of Peel, it’s a lot of responsibility, but Terry does it with pride and has a team of dedicated volunteers by his side.

“There’s a lot of stories out there, you never know what someone is going through,” he said solemnly. “I do it knowing that I helped someone, that’s all I care about at the end of the day.”

The next time you’re in Brampton, be sure to stop by Sunset Grill and say hi to Terry and his wonderful team!

Terry is part of this year’s Father’s Day profile series highlighting Breakfast Dads – the hard-working, dedicated dads that make up the many faces of the Sunset Grill community.

Days off call for breakfast out. ☺️

This is your reminder that we are OPEN today!

Gord and I had brunch at Sunset Grill in Blue Mountain Village. He had Eggs Benedict on crab cakes and I had bacon and eggs. Happy bellies!
#baconandeggs #eggsbenedict #crabcake #bluemountainvillage @SunsetGrillCA

Visit your nearest location to try one!👇

We are OPEN today! 🍁

Start this Father's Day with a breakfast he'll love. 🥰

We will be OPEN on Father's Day! 👔 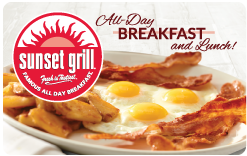